FINALLY time for some photos of Virus and Hyssing! They’re not dead, they’ve just been in hiding. BOL!

Mom got herself a new camera – a Canon EOS 60D to replace her old 350D, and a new lens, too. It finally made it possible to take some decent photos of the cats inside without the flash (and the evil eyes).

Hyssy and I are ornithologists!

This is our favorite look-out!

A whole flock of bullfinches! They were spooked when Mom brought out the camera, but they eventually came back!

We got a question about whether the kitties came along to the lake. They certainly did, though they do think it’s a little boring since we don’t have as much space to run around inside there, and it’s not safe for little kitties to go outside next to both a road and railroad. So – can you guess what sort of adventure Hyssy went on?

Yes of course he escaped…

He had a bit of a look around the garden!

Mom decided to take it really easy as long as he was in the garden, so she wouldn’t spook him. That’s why she took time to take the photos!

..and he came over to sniff some kitty treats!

She DID catch him.. then PA came home and when she handed Hyssy to him he spooked and ran off. Again. Further that time.. but we left the door open and put out some yummy foodables on the counter so he came home after an hour or so!

The kitties were hungry and annoying the other day, so I gave them something to do. LOL..

At one point they wanted the same treat and stood forehead against forehead pushing back and forth.. Unfortunately I had turned the video off by then, it wasn’t very action packed.

At least they figured out what to do eventually. Silly kitties.

I let the kitties outside for the first time this year since it was so nice and sunny!

Happy Saturday everyone! We’ve had some fun at the Cartoonize site. They let you make a cartoon look-alike of your cats.. So here is Hyssing:

You’re not allowed to add the spots on the nose (his half mustache), but it’s still fun! The one of Virus may actually be looking more correct, but we didn’t want the two cartoon cats end up looking too much alike so we made Hyssing a bit different.

And now.. the pièce de résistance…. we decided to see how close we’d get to DOG look-alike with the kitty cartoonizer. They don’t have one for dogs, unfortunately…

Not so bad all in all, kitty challenges taken into consideration.. Now Gummi, on the other hand.. wasn’t quite so lucky! We haven’t stopped laughing since we saw this:

We haven’t forgotten about you, we’ve just been furry, furry busy. Today Mom was finally home for something else than dinner and sleeping, so we got to go outside in the SUN!

Two more weeks of craziness and then things will slowly start to go back to normal (and that’s technically “normal” since Camp WriggleButts is a crazy place to start with).

Kisses to all
Gummi, Hyssy, Virus and Bajas

Can you believe Hyssing turns 2 today? Me neither! We’ve got a surprise for him, but not until tomorrow! You’ll have to wait and see, just like Hyssy! 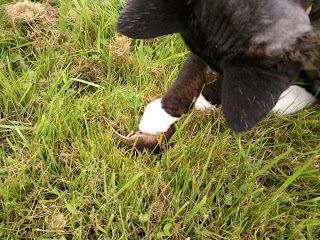 I just have to show you this video of the boys out taking a stroll. The kitties are only allowed outside when the weather is nice and we are home. Virus LOVES it and Hyssy thinks it’s pretty fun to chase the butterflies and bugs but also a bit scary. I generally let either Bajas or Gummi run free as long as I’m outside (the other one will be in the x-pen or indoors). One day I noticed Virus trying to make Bajas come along on a walk with him down the path towards the woods. They looked super cute walking away together, although I was a little worried. But I do think it is important for Bajas to know the area and be able to find his way back in case something happens so I let them leave.

Anyways – they now take their little walk from time to time. They only stay away a couple of minutes, but the other day I managed to get a video of their return.