I got MORE new toys in the mail! Mom put some of them away, and I’ve already tore a big hole in the KONG squeezz donut, but here you can see me having fun with my new EGG!

Mom’s been on a shopping spree again, but I’m not complaining as long as the stuff is for ME! 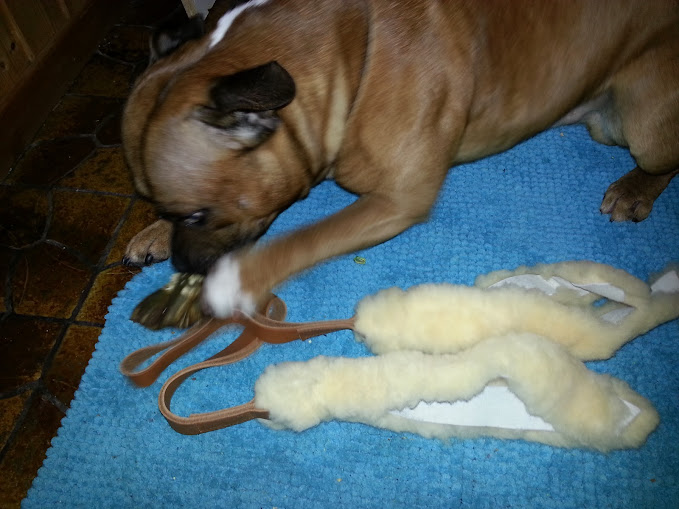 We were tipped off that Clean Run had some items with free International shipping. We’ve been on there several times looking at different products, but hadn’t gotten around to buy anything yet. Obviously we decided to stick to the items with free shipping, which limits the options quite a bit, but we decided to try the buffalo ears and these woolly tug toys: http://www.cleanrun.com/index.cfm?fuseaction=product.display&Product_ID=1735&ParentCat=449

The buffalo ears were thin and not suitable for a staffy size dog (I might have tried to eat it anyway and got a piece lodged in my troat..) but it’s probably okay for small dogs. The tug toys were brilliant! They’re probably not the sturdiest tug toys in the world, but you can buy tug replacements you can put on the leather handle. The leather makes them very comfy for the human, too, and they should make a great toy for those who want to entice their dog to tug more!

Tip from Mom: You can find the items that ships free here: http://www.cleanrun.com/index.cfm?fuseaction=category.display&Category_id=449 So many large companies are based in the US and many won’t ship internationally at all or it’s really crazy expensive (usually more than whatever you buy) so this is a really great deal for us! The KONG “safestix” (known among my friends as.. ahem.. the KONG safesex) is on the free shipping list and Gummi has and loves this and it’s really sturdy, too. You know how you KNOW you shouldn’t really throw sticks for your dog to fetch, but it can be so tempting? These are easy to throw (and easy to spot in the grass), float and bla-bla-bla.. but most importantly won’t splinter and stick in your dogs’ thoat. We have both a large and a small one and the small one is really pretty much as sturdy but much more convenient to take with you if you want to go play fetch. The large one is good for playing tug, though! But I might end up chopping it in two like a friend of mine did..

PeeEss: If we remember correctly you’re always supposed to assume anything “reviewed” on a blog was given to them for free, just in case, even though in this case the only free stuff was the shipping! 😉

Come skiing with us [small] from The WriggleButts on Vimeo.

come skiing with us from The WriggleButts on Vimeo.

Come join us in the snow!

Fourth time for Gummi and this time we did 5 kilometers. The previous trips were 2.5, 2.5 and 3.5. Although the average speed is higher than when walking the main reason I increase gradually is that he needs to learn new rules – like not crossing the ski tracks without permission and to make sure he doesn’t hurt a paw or otherwise injures himself with the increased amount of running.

Gummis paws are (unfortunately) not as strong as I’d wished. If he gets to run around by himself in the snow barefeet he tends to end up bleeding.. so we’ve been searching for dog boots that fit and (this is the tricky part) stay on!

The boots he’s been wearing these last few days are the deflated baloon style boots from Pawz. It was Brutus the Frenchie that introduced us to them a few years back, but we haven’t actually tried them until this winter.

Our review: Although they look sooper stoopid, they stay on very well even on the smooth legs of breeds like the staffie. The main balloon part is wider than necessary and a few times he’s stepped on one. I might get him one size smaller for the back legs as those feet are smaller. They can be a pain to get on, but not a lot more so than other dog boots. They are convenient when you put them on inside as they give nice grip on smooth floors. They don’t provide any kind of warmth, but they prevent snow to be packed between the toes and that’s the most important thing.

We have several other kinds of boots, too, that we’ll tell you more about another day!

Look what we’ve got!

But I’m not sure that skijoring thing is for me, staying on the right side of the tracks and keeping up is plenty challenging. I think Mom can move her lazy butt around on her own, thank you very much!

Mom and I have been working on a new trick. Since I’ve learned to walk on my hind legs it was time to learn to walk/stand on my front legs!

This video is high quality, so if your interwebs are slow you might want to choose the other one!

handstand 1 from The WriggleButts on Vimeo.

handstand liten from The WriggleButts on Vimeo.

We’ve completed another one of Freestylehundar’s Trick of the day challenges! This time Gummi had to tidy up 3 objects in one session. Since we’ve worked with similar things already it wasn’t a great challenge. It was all about convincing Gummi the toy he’d already put in the box couldn’t just be picked back up and deposited again for a new treat. 😉

Mom and PA went to Thailand for a couple of weeks so we only had two weeks instead of four, so it was good to have a head start!