Today I thought I’d make you all smile with a few pix of my silly past.

I also strongly encourage you all to go to Mango Minster to VOTE for your favourites! Right now it’s for the Cat Dog cat(heheh)egory where Hyssing and Virus are entered.
B

Remember the video of Virus carefully going downstairs one step at a time? If you do – good for you ’cause we can’t find it. BOL! Anyways, the main point of this introduction is to say that

..sometimes the apple falls (quite literally) quite far from the tree…

That’s right – Hyssing takes the “just dive into it” strategy… (Mom’s even more terrified when the chair’s not standing there..)

..And since I know you come here for cuter pix than just kitties – here’s a couple of ME!

It’s that time of the year again – Mango Minster!

We tried to enter last year but we’re fearing that our mails are not getting through to the Mango Estate so this time we’re attempting a late on-blog entry so we’re not left out.
So here they are:
Cat dog – Virus – male
Breed: Devon Rex

Hey Dad! Stop being such a snob and start POSING!

Uhm.. Just pose, Dad, not getting in my face!

Purrrr girlcats! I’m like totally loosing my baby toofies and everything. That makes me a macho, macho mancat right?

Well it turns out I was right. And I’ve rarely been so happy to be right. Nothing anything scary going on, it really was just a loose baby tooth he’d been picking on. Yesterday morning (or night, sometime, really) I found something small and hard beside me in bed… I was soo sure it was a tooth – and that morning I looked around for it and found it. Yay!

Here it is, next to a AA battery..

It really is quite small, but it’s still impressive how much of it is hidden…

At least now I don’t have to worry about something being seriously wrong.

I made lapskaus for dinner yesterday and it was YUMMY! It’s really simple and I thought I’d walk you through it if anyone wants to try.

I started out making stock by first browning and then simmering some rather tough meat and a piece of bone with a couple of carrots, half an onion and a bay leaf. You don’t have to do this, though, but I had the time! You could skip this step and use sirloin or something similar + stock.

If you’re not making stock you start at this point. I had my tender pieces of beef back into the pot after sieving the stock off. I took half a carrot and mashed it up with a fork hoping it would add nice flavours to the gravy after boiling in the stock for so long. I just made that up today, though.

Then add diced potatoes, carrots and pretty much any vegetables you like. Root vegetables are traditional. I just use carrot and potato but I will usually stir in some chopped, frozen spinach when it’s done.

Add your stock, either home made or bought so everything is covered.

Let simmer for at least half an hour. Season to taste – salt (if you use home made stock at least) and pepper (I use lots of pepper). Don’t stir it too much, but you want the edges of the potatoes to break up (I often mush up a couple of pieces if it turns out to be too soupy). My meat was a bit too tender by the time I got in the vegetables and so it broke up a bit with the final stirring… And I didn’t get any pix with the spinach added. It should be a thick porridgy texture. PA ate his with a fork.

I have a little bit of leftovers for later. It’s one of those dishes that taste better the next day making it great food when you have company over since you can make it in advance and just re-heat it. You can also use more stock so it remains a chunky soup (suppelapskaus). Any meat and even sausage can be used, but this is my favourite and the most common version.

Did you know 8th Avenue in New York once was known as Lapskaus Boulevard? That was back when Bay Ridge in Brooklyn was the center of the city’s Norwegian/Scandinavian community. You can still find the deli “Nordic Delicacies” http://www.nordicdeli.com/history/history.htm

Anna asked if you were to brown the meat before simmering or just chucking it in. You can do either, but browning it will add a bit more flavour and color.

Hi guys, I was quite shocked this morning to find Hyssing’s cute, white paws reddish with blood! I’ve no idea why, but I’m hoping he might have bled some from one of his baby teeth that’s about ready to fall out. I’ve checked over all the boys and not found any injuries. 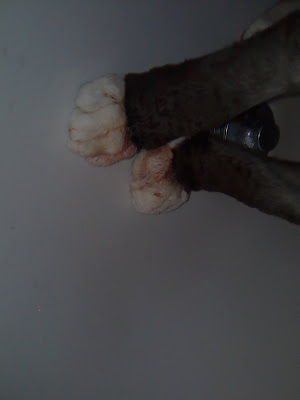 I’ve washed them and will check them again when I get back from school in a couple of hours.

Ane
Update@ 2PM: when I got home there was no more blood and I’ve not found any more blood either on the boys or anywhere else. We might never figure this one out. I’m making a traditional stew here and cut some yummy pieces of sinewy(IMO yucky) meats for them all to gnaw on when cutting up my meat. I think you’re supposed to cook it with all the stuff in but I prefer less of a “clean up” operation afterwards when I’ve cooked the meat and stock and have to take out bone and other inedible pieces. I’m really picky, though. Good thing the boys appreciate it.