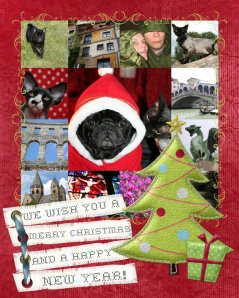 With one of Mom’s favourite Christmas songs (Swedish) we hope to start off your Christmas Eve in a good way. Do you recognize their outfits? They’re celebrating St.Lucia’s day (remember from day 13?)

We might not be much online the next week as we’ll be travelling a bit around and not have access to the Internet.

Here’s one of Mom’s favourite NORWEGIAN Christmas songs. As a bonus the video features lots of pix of the beautiful scenery of Northern Norway.

We hope you have a nice and peaceful time through the holidays and that the new year bring you nothing but happiness!

We saw another cute Christmas video! We thought it was good to post it today to inspire the right behaviour in us all before Christmas Eve/Day.

Mom did some major packing yesterday and I wanted to make sure I wasn’t forgotten. With that amount of clothes I was certain she’d be gone for a LONG time. Can you see me?

Yup – that shiny black thing is me! 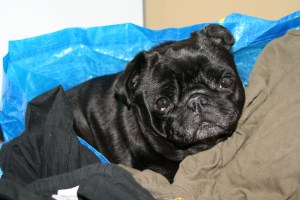 Kisses,
Bajas
(Okay so it was a false alarm.. Laundry day isn’t quite packing. But hey – a guy gotta be on his toes at times like these.)

You should probably biggify it to see it properly! 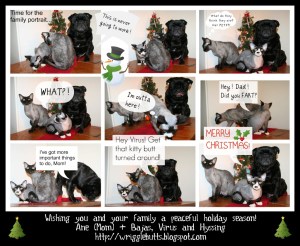 Can you believe how fast time has flown? We’vve now had 20 posts in a row and there’s only 3 more left before the Christmas post on Thursday.

Here’s another video from the guys that made the beach dogs video. They sure are talented!

Hi guys! Of course you can see me in my Santa suit! Mom didn’t get any pix of me and my apperance yesterday since she had misplaced the camera!

But I do look pretty darn cute, don’t I?

We’re getting into the Holday spirit here at the WriggleButtHome. Mom’s been tidying up the place a little. You don’t really have time for that sort of stuff when you’re studying for exams… Two machines of laundry, too, but still more saved up for later. We’ve had a few of her study buddies over for a little treat after all the studying. They’ve decorated some more cookies and chatted and have nice hot cups of “gløgg” a kind of mulled wine served with chopped almonds and raisins (Mom only have the almonds in there). Now the entire apartment smells sooo good of Christmasy smells.

Here are a couple of pix of the result: 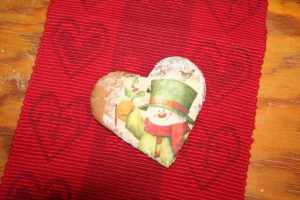 This one might not be too edible. It’s sort of a sugary decoupage. White frosting plus the top layer of a cute paper napkin.

They chatted more than they decorated, so some of the dancing gingerbread men remained naked. 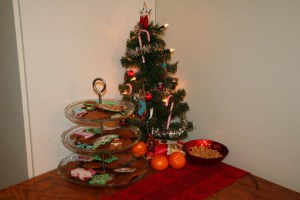 She’s even got up a little Christmas tree! She’s not all that fond of fake trees or decorating the tree before December 23rd, but apparently all rules are forgotten? (Mom: if we were spending Christmas here I would have had to get a proper tree and follow the rules, but this tiny thing doesn’t really feel like a tree, it’s more just a decorational object. But I do get to display a few of my very cute ornaments, and it made it a bit more Christmasy here when we had guests over.) She wrapped the entire table in alu-foil, made 3 colors of frosting and white, green and blue colored shredded coconut and some assorted candies to decorate with.

I even got to make an apperance in my Santa suit!
Bajas

PS: Mom found the following recipe in case anyone would like to try to make gløgg! http://manitouheights.com/rms/gloegg.shtml From looking at it Mom’s guessing it won’ taste quite like ours but it might be worth a try if you’re looking for a new kind of drink to serve guests. The pineapplejuice, figs and ginger slices are not in any Norwegian recipes I’ve seen (pineapple juice wasn’t something you could get here back in the days so that must be a recent addition, but dried figs were common for Christmas and still are for many) and candied orange peel could be substituded with regular orange or lemon peel which is what you see in most recipes).

Hey Gingerbread Man – we’ve got a tip for you:

Mom was at a friends house today decorating cookies… 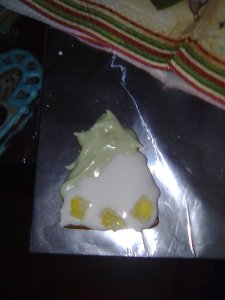 We’ve finally got snow. There’s been a little dusting now and then, but the stuff that fell yesterday is still making everything white! Yay! I’m of course out there making all the white stuff yellow. Heheeh… 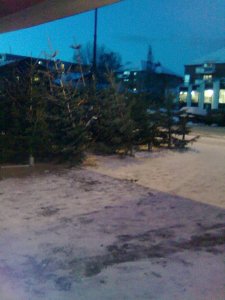 They’ve also made a little forest outside just for ME! But Mom refuses me both to go in there and to pee on them alle like I’m supposed to.. Sigh..