Today we’ve had a great day in Pula. It’s a really charming little town. We started out heading for the grocery store and bakery for breakfast (yes, we dressed first and no, I’m not going to go through all the day like this.. ). It was really yummy, crusty white bread.. Vacation is good. 😉

Today we did most of the sight seeing stuff… The Arena (Amphi theatre), small Roman theatre, old town and so on…

I’ve already shown pix of the Arena, but this is one of the lion statues inside: 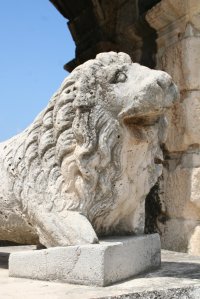 And – because I uploaded my pix in the wrong order – here are my yellow socks after walking in the rain in Ljubljana. I think we can all agree that the black part on my sandals like sharing… (Socks in sandals.. I know.. but I’m sticking with no shoes on this trip – so that’s the price I pay for not freezing.) 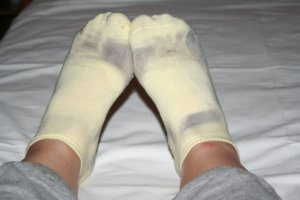 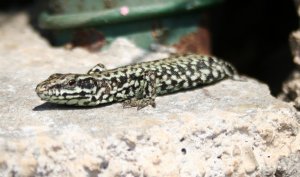 When we went to the bus today we met this little guy – and several of his friends. There’s also a mommy kittie and 4 kittens around. We saw them playing this morning when we didn’t have any cameras handy. 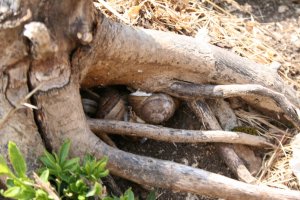 Can you see the snails? They’re hiding in there from the sun and heat I think. Looks like they’ve chalked it all up and are waiting for rain. 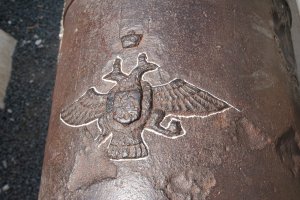 We found their army (or more likely navy) museum. Wasn’t much there and we probably wouldn’t have gone in anyway if it wasn’t for the great view we’d get from their tower. Plus the entrance cost just over a dollar. We could cope. 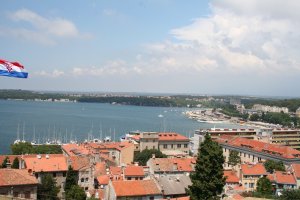 View towards the train station and harbor from that tower. 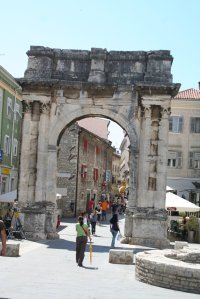 This is “the golden gate” – obviously not golden, but looks rather unique being free standing on its own there in the square. It’s from the late first century BC. Wow… 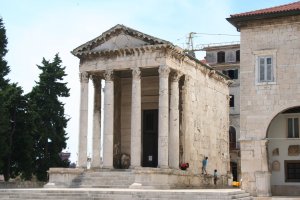 This is Forum. It was one of three temples and if I got it right two of the others are now incorporated into the town hall where there have been major dealings with the business of the people of Pula for over two centuries.

Tomorrow we will, if all goes well, head for the beach. Now doesn’t that sound nice? 😉